The Future of MODX

I have the feeling that more and more people do not use MODX anymore.

So do you still use MODX for new projects? Or did you change to other CMS?

I’m building a new site in MODX currently, and still use it regularly, but I share your concern. It’s still very hard to beat in terms of flexibility and ease of development/modification, but clients are becoming more and more accustomed to visual editing with WordPress et al. so it’s becoming a tougher sell. FRED is a great start in that direction, but it’s still somewhat immature and it lacks a few of the compelling features of Gutenberg Blocks. Not sure how much traction that will provide.

I have yet to try out MODX3 simply because I haven’t got the time, and I think that’s really the crux of the issue. The folks developing MODX aren essentially a volunteer force, and I’m sure the core team is busier than I am, which means it’s nearly impossible to schedule significant development time on a task that doesn’t generate income, so development is slow, and as a community, I don’t think we’re actively pitching in as significantly as we might have in the past. It’s not a great situation, and I’m not sure there’s a viable solution, but I really like MODX and am finding it hard to jump ship.

I mean… you are asking on the MODX forum. I doubt you’ll find many people active on here that don’t use MODX.

Yes, and I just discovered ModX a few years ago. I had experience with Drupal before, and I hope I don’t offend anyone, but I hate Drupal and I’ve even found their community members to be some of the smuggest people, lol! Maybe it was just the folks I knew, but it compounded my frustrations with that CMS. I’ve spent a lot of time studying WCAG 2 and Section 508. In my experience, ModX makes designing for people who have disabilities really fast and perfect. I can’t get that level of compliance easily with other CMSs. I know IRC Chat is having a revival because it has this group of people that keep it going. I think ModX might have a revival too and I am so grateful that those people who are more technically gifted keep it going.

I have the feeling that more and more people do not use MODX anymore.

So do you still use MODX for new projects? Or did you change to other CMS?

Funny, I had the feeling more people were using it than ever before…

I use MODX for nearly all my projects these days. Well, at least when a CMS is required.

I also have a vague uneasiness about the future of MODX. I have no visibility into how popular MODX is but I have the impression the project is embroiled in some acrimonious internal disagreements and this may be inhibiting its growth and adoption to some extent. I have no special knowledge of the situation tho and my impression may not be accurate.

I use MODX for all my web projects and have no desire to make a switch. It’s been a while since I went chasing waterfalls but based on my past experiences with Drupal, Joomla, and WP, I much prefer the way MODX allows me to work. I’ve never used Gutenberg Blocks so maybe I don’t know what I’m missing but ContentBlocks gives me everything I need in a visual editor with all the flexibility that makes MODX so great. I’ll be using MODX until they turn off the lights.

We only use MODX. period. We will use MODX until we keel over.

I like MODx because I would rather write some reusable code to create HTML than fiddle about dragging blocks around on every page. I admit that I don’t use the power of MODx much except for templates and tags. And I don’t use plugins much because they become obsolete over time requiring maintenance. I hardly ever use the editor, I prefer static resources that I can put under version control.
I hope MODx lives on for a long time.

If I can’t build it in Modx, I don’t build it. Yes I’ve been frustrated at the lack of an understable (to me as a non-php coder) e-commerce system but I’m finding that plug-in systems like Shopify Lite are filling the gaps.

I’m currently building a site for a gentleman in his 80s so he can fulfill a dream of having his own publishing platform. I wouldn’t like to do this in Wordpress. With all the testing we’ve done, he’s getting along very well with it. I like the simplicity and so does he.

In my experience visual editors / drag and drop just creates confusion and messy pages where the client loses the focus of getting information across to their audience. A proper brief and customised manager with a set of templates has always been the simplest way to go for me and my clients.

I don’t know the number of sites in the wild, but judging from development activities, I also feel that MODX is not as hot an happening anymore today as compared to, say, 10 years ago (if it ever was trendy at all). Not necessarily a bad thing! A track record that long means a lot of continued dedication from a small group of people, making it a very reliable and stable companion for the people using it. Myself included.

I’ve also looked at other options in the past, but keep coming back for the flexibility and ‘don’t get in my way’ mentality of MODX. It may lack more modern features and it definitely has its quirks, but it gets the job done and in the end, that’s what everyone wants.

Maybe you can compare it to the adaptive cycle, a commonly observed pattern in ecology. 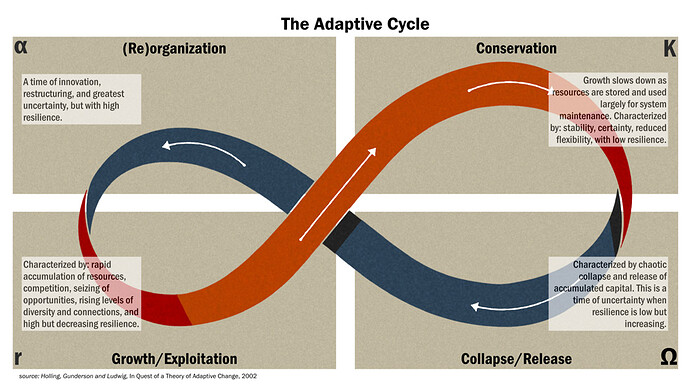 For MODX, this cycle would be something like: Evolution was born out of the collapse/release of Etomite. It reorganized and grew more popular until new features and architecture were demanded that would break the existing structure. A period of chaos followed, resulting in a split between Evolution and Revolution. Revolution went on to reorganize itself into a growing ecosystem again, gaining some traction and winning a couple of awards in the CMS sphere. Evolution, remarkably enough, remained in daily use and stabilized itself in such a way that it still exists today!

I think that Revo might be in a similar spot as Evo was back then, before the split… But for different reasons. Lack of development power means that MODX3 has become a glacial endeavor, where some challenges (ahum, ExtJS) still remain. Fred seems nice, but in my view it’s also a distraction that stretches the available resources even thinner. Some extras also seem to have stagnated in their development. SimpleSearch for example, which I would label as essential to the ecosystem, looks fairly unmaintained to me. And if wasn’t for ContentBlocks, I don’t think MODX would have survived the responsive era.

Anyway, this is not meant as griping. It’s (in my view) simply reality. But even though growth (with that I also mean: influx of new developers) may be flattening, that doesn’t mean MODX is going away any time soon. Like I said, it’s currently stable, useful and relatively well organized. A long conservation phase could well be ahead for the project.

Forests can stay in that phase for thousands of years btw. They’re not as resilient anymore to wildfires for example, but as long as lightning doesn’t strike, they’re able to optimize resource use and organize themselves more efficiently. I see that too with MODX. Like the proposal during the last bug hunt to explore something like OpenCollective. And although I sometimes spot some disagreements on Github regarding architecture and direction, the overall process of creating and integrating pull requests seems to be very cooperative and professional. Again, many thanks to those few dedicated heroes, who’s brains are capable of computing all that stuff!! And who have to endure the sh*t that’s sometimes being flung at them in the process. It doesn’t look like a very glorious battle to me.

So long story short: I’m also sticking with MODX. If it ever goes away, I am eyeballing the Directus project (clearly still in growth stage) as a potential successor (if still needed). It can attach itself to any existing MySQL schema, so you can hook all your existing data to their headless backend manager. I tried it briefly and it works quite well. You can even use it together with MODX, I think, but guess what… I kind of missed (ahum) ExtJS and MIGX when working with my custom data! Especially inline editing in CMPs is something that can save you a lot of time in MODX, as compared to Directus, where you have to open a panel, change value, save data, etc. And if that’s still not working for you, you can create an import script for Excel files or CSVs, manage the data elsewhere and fetch it via some API, forge your own front-end with React/Vue or whatever… MODX is the computer that can’t say no!

I really like MODX, but it has become dated, though it is still an amazing platform. Not only did I write a book about it, I built a pay-as-you-go cellular company on MODX2 (including multiple-tiered commissions, billing, and direct connections to all major carrier backends), as well as a prototype for a PHD on MODX3 (involving pulling publicly available personal information from multiple sources via APIs). I searched today for updates on MODX3, which is how I found this post. The project still has updates on Github, but it has been alpha for a very long time. The changes in PHP coding standards, PHP itself, and the lack of Namespaces in MODX2 are huge problems now, and has been since I first brought it up years ago. I even read an article today where the UI/UX developer expected MODX3 to ship in 2018. I believe we are far past due for an official update and ETA on beta and production versions.