I am having a problem with using elFinder as part of the Tinymcewrapper extra in a new site. I also have Newspublisher installed as an alternative editing system for some users.

Newspublisher works fine, as does Tinymcewrapper for the most part, the problem being getting elFinder to work: Newspublisher and elFinder seem to work OK, allowing media insertion, whereas with Tinymcewrapper I get a mostly blank window - does anybody have any ideas? I hope the screenshots are visible.

Thanks in advance for any help! 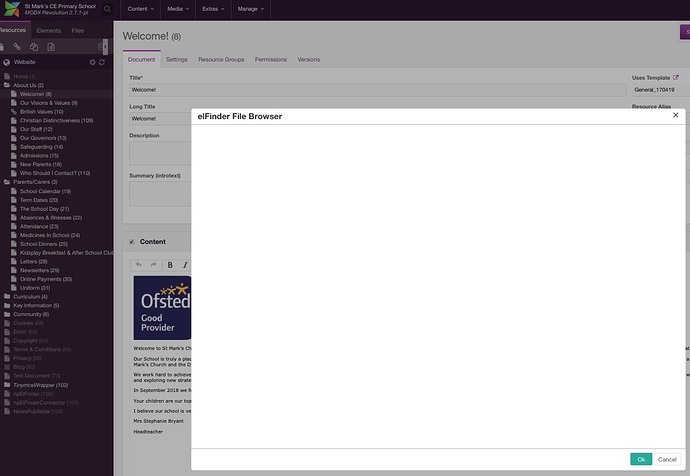 Had the same problem, I switched to CKeditor.

In fact I have switched from elFinder to Responsive File Manager (RFM) - still a few problems, but I am much further down the line than I was with elFinder! 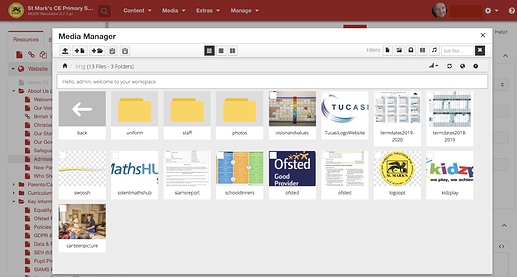 I realize this is an old post and the OP has settled on a different file browser (my apologies for the inevitable notifications). I have the identical issue with elFinder and TinymceWrapper. My elFinder browser window looks exactly as the image above. I have read everything I can find, and see suggestions for possible elFinder paths, and a suggestion to create a custom property set for the elFinder snippet – but no information on what to do with those paths and properties.

Is there a set of step by step instructions somewhere for configuring elFinder to use with TinymceWrapper?

Just thought I’d update the solutions I’ve found to this issue. In my case, the elFinder folder was still zipped on the server. I’m assuming it was supposed to extract during installation of TinymceWrapper… ? Anyway, seems things work much better when their directories actually exist.

Beyond that issue, it was a lot of trial and error setting the path to elFinder – both figuring out where to set it as well as what to set it to. When I get a chance I will try to document this so others can follow.